Chewonki Traveling Natural History Program educators are looking forward to giving people a greater appreciation for American crows (Corvus brachyrhynchos) with the help of our two new resident crows, A and Z (proper names to come). They arrived at Chewonki from a Verona, Pennsylvania, wildlife rehabilitation center, where both were delivered as hatch-year birds in summer 2018. Infected with West Nile virus, they were housed together while they recovered and bonded so deeply with each other and their human caregivers that they are no longer able to live in the wild.

“They seek out human interaction,” explains Traveling Natural History Program Coordinator Emma Balazs. “That is helpful for training, but unfortunately they can’t fend for themselves.” They have been at Chewonki since September 27 and are going through training to become celebrities in Traveling Natural History Program presentations. “They can get nervous about new items and people in their cage,” she says. “We’re observing carefully how they react to different visitors and situations.”

With the loss last winter of longtime star Peepers, a mallard duck, Traveling Natural History Program staff are happy to have some diversity back in their bird population, which is mostly raptors. The crows will participate in at least four presentations: Animal Adaptations; Predators; Fur, Feet, and Feathers; and Beautiful Biomes.

Humans too often give crows the cold shoulder. In literature and film, these glossy black birds frequently portend death or bad luck. The collective noun for a flock of them, “a murder of crows,” doesn’t help. Their call is loud and unmelodic, and because they roost together at night (when they are young or not breeding), they raise a ruckus.

Balazs says crows deserve respect. Research shows that they are smart, resourceful, and humorous. She and her staff are enjoying working with A and Z. “They’re very intelligent, very curious,” says Balazs. “They are doing well here.”

“Because they are so smart,” she explains, “these birds need a lot of stimulation.” Freshmen from Morse High School in Bath recently lent a hand when they visited Chewonki to make “puzzle feeders” for the crows. Using simple materials including PVC and egg cartons, the students, all participants in the Chewonki Waypoint Program, put together feeders that require A and Z to problem-solve in order to get a yummy reward.

Crows are scavengers and gourmands. They relish carrion, garbage, reptiles, amphibians, mouse bits, nuts and grains, fruit, eggs, and worms (mealworms are the filet mignon of A and Z’s world). They clean up roadkill and steal corn from newly planted fields and harvest stubble. They are robbers, yes, but also help tidy our world.

The crows’ strong attachment to each other presents an interesting problem. “It’s great that there are two of them, but that also makes training more challenging,” Balazs says. “Sometimes they progress at different rates.” Traveling Natural History Program staff may separate them for certain lessons or have two staff members working side-by-side, one-on-one. “I don’t promise anyone any particular time frame when training,” she says. “We move as quickly as we can,” but ultimately, as is so often true with crows, A and Z are running the show. Owl In a Day’s Work 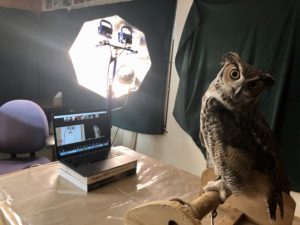 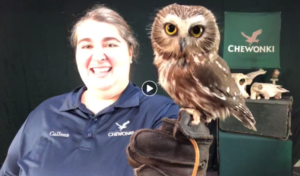